One of my big grand adventure goals is to visit all 62 U.S. National Parks! I plan to use this National Parks Checklist to keep track of all the parks I’ve been to.

When I say “visit”, I mean really visit — not just pass through.

There are several parks on this list that I’ve actually “visited” by passing through them or stopping in for a few minutes, but I am not crossing those off the list.

I am only crossing a park off this National Parks Checklist if I feel I have fully experienced the park as best I can.

There are definitely some on this list that I’ve visited quickly in a day or two. But even then, I at least tried to fully experience each major part of the park.

On my very first road trip to see my first set of National Parks with my sister back in 2014, we saw almost 10 parks in two weeks. We started in Texas and took an epic road trip up to Montana.

While it was fun, I do not recommend seeing that many parks in such a short amount of time!

How We Experience the National Parks

The National Parks are full of vast wilderness and wonder. You could go back to the same park dozens of times and experience something new!

Everyone will experience a park completely differently and I believe the parks are for people of all walks of life and hobbies. However you choose to enjoy a park, I definitely recommend taking your time and really being present in the moment to fully experience it.

Since I’ve become such an avid backpacker over the years, my personally preferred way to take in the parks is by spending several days hiking a long backcountry trail — so that I can experience the wildest, most untouched parts of each park! But I also enjoy day hikes!

(And as I already mentioned, this is just my preferred way of experiencing the parks. Everyone has to find their own special connection to the parks and experience each park how they want to! I’m a firm believer of this!) 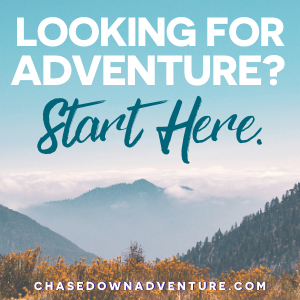 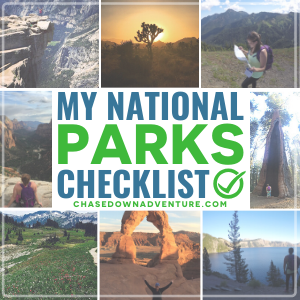 @ChaseDownAdventure
Blooming season is keeping my heart happy, when ev

Happy Birthday, Love! My wish for you is that you

I recommend following these people to hear less wh

The quarantine has forced us into a quiet, stillne

Congaree National Park deserves so much more of th

Each National Park is near and dear to my heart, b

My National Parks Checklist is live! Count so far:

My adventure partner for life. Also, apparently a